Get my free Fine Art Photography Newsletter for updates on my photographs, upcoming projects and special subscriber only discounts. Free. With zero spam.

Roundabout Night, Kensington London Photograph
Perspective from 27 floors up. One of my more daring night photography shots. Holding my camera out at this height was decidedly scary, even if I did wind the strap around my wrist.It's not often one gets a perspective like this in London, so it was worth it. I just happened to look out of the window and thought I had to get this shot.This is now one of my favourite images. I was curious to see how it turned out and because it was so unexpected I was very happy I got this clear a shot.

It was a great day to get out of town. I love living downtown, however, I wanted to take photos in a different environment for a change. You need a completely different approach for this to shooting an urban photo. Along the bank of the Niagara River there's an observation point and because this is such a scenic view on a fabulous sunny day like it was that day it's often full of people, admiring the view and taking pictures. So I took this shot before getting to the observation point and we also headed there early. Just as well as no sooner had I taken my images several cars pulled up. I actually stood on a low wall to get this shot because I wanted to be elevated to get as much of the beautiful view as I could. I don't think any picture can do this scene justice, it's quite incredible. Just looking at this image takes me right back to the moment I captured it. 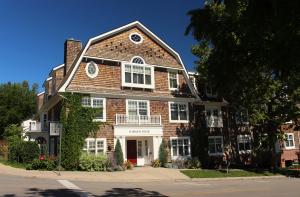 I'll be using my blog to say a little more about some of my photos, giving a little more information about them. In July Harry and I decided to head out of Toronto just for a change from downtown Toronto. We went to Niagara-on-the-Lake, a very picturesque little town. Someone mentioned to me that Harbour House was haunted... I didn't believe it. It looked far too beautiful to be haunted. I took this shot of Harbour House from across the road and on the corner, which was the best vantage point to get the house and the side road in frame. I was fortunate to get a clear view ( it was a Saturday and so there were many visitors in the town) and that really was the colour of the sky.